You don't have any saved vehicles!

Look for this link on your favorites:

Once you've saved some vehicles, you can view them here at any time.

You Are Here: Home » Chevy EVs

The automotive industry is famous for turning trends into staples. Take the SUV. What started as an experiment has blossomed into the industry’s hottest and most sought-after vehicle category: that is, until now. Brace yourself for the next trend because it’s here. It’s the electric vehicle (EV), and every major automaker is getting in on the action. The lineup of Chevy EVs is already impressive and class-leading, with the mighty Bolt leading the charge (pun intended!), but what makes alternatively-powered vehicles so attractive?

View Chevy Inventory
About Us
Financing 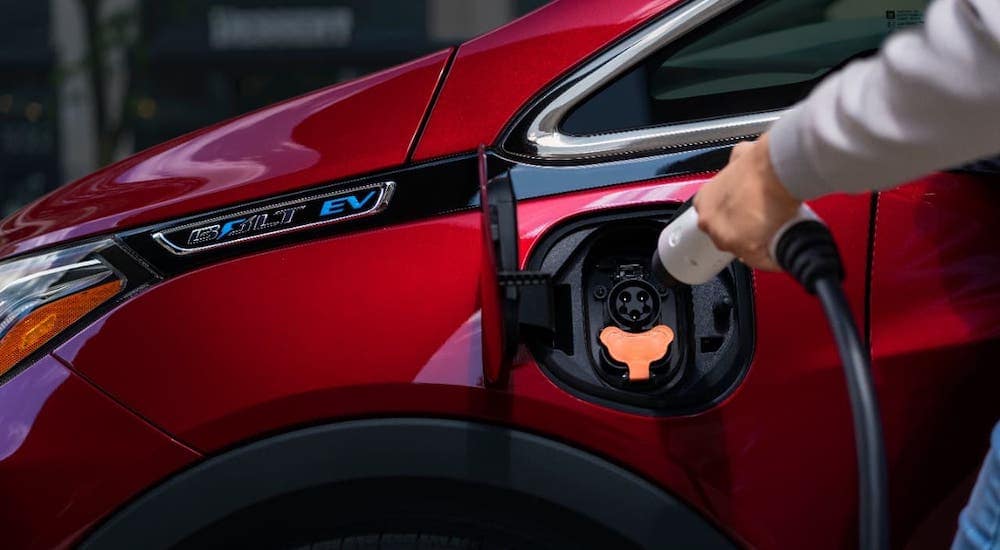 What is an EV?

Consumers are itching to leave fossil-fuel dependence behind for many reasons, including practicing good environmental stewardship. EVs are all-electric, which means you’ll never visit a gas station as long as you own one. Folks that want to reduce their carbon footprint will love this, and the fact that EVs are on the cusp of going mainstream means the growing infrastructure of charging stations make ownership easy.

EVs differ from Hybrid and Hybrid Plug-Ins because they’re solely dependent on battery power. Hybrids get power simultaneously from gasoline and a battery. Hybrid Plug-Ins take it a step further, relying on battery power and switching to gas only after the battery is depleted. With an EV, you’re 100% reliant on battery power, which means keeping a close eye on specifications like range, time-to-charge, and ease-of-access to vehicle diagnostics that can tell you how many miles are left while you’re on the road.

Is an EV right for you? The best way to decide is to visit a dealer and take a test drive of any EV on the lot. Do a side-by-side comparison of gas-powered vs all-electric to see if you notice a difference. We’re betting you won’t, even if you’re an electric vehicle holdout. A lot has changed with EV technology - we think you’ll be pleasantly surprised.

How Chevy is breaking into the EV space

Chevy is not alone in its quest to engineer battery-powered cars and trucks that consumers will love. In a March 4, 2020 press release, General Motors announced plans to grow its portfolio of electric vehicles with the help of advanced battery technology and by tapping into an array of platforms across all of its brands.

In fact, the company has committed to a goal of achieving an all-electric portfolio of vehicles in the future. It’s a bold statement and one that gives us insight into the importance and relevance of electric vehicle technology. GM promises vehicles that deliver in previously electric-unfriendly categories, like work trucks and high-performance sports cars. Their goal is to continue refining the technology to lower battery prices and capitalize on popular brands like Chevrolet to lead the charge.

What’s in the works? For 2021, Chevrolet will release the most updated Bolt EV yet, but that’s not the most exciting news of all. The brand new, 2022 Chevy Bolt EUV is a crossover-style EV that will feature GM’s Super Cruise hands-free cruise control technology and a whole host of luxury and convenience features that will set it up to compete aggressively with other hybrid SUVs and EVs in its class. Chevrolet released teaser photos of the yet-to-be-released Bolt EUV, and while it’s hard to say exactly what to expect, its silhouette appears to be aerodynamically-styled, with a tapered front end and a sleek roofline.

While it may take a while to get up-to-speed with owning and operating an electric vehicle, Chevrolet is betting big that this powertrain option will eventually overtake the current American preference for traditional gas-powered engines. The learning curve continues to shrink, as does consumer resistance to electric vehicle technology. Automakers have figured out how to deliver similar (and sometimes better) performance and capability on their all-electric vehicles, eliminating consumers’ main objections.

The Chevy Bolt EV verifies Chevrolet’s commitment to electric vehicle technology and headlines the automaker’s efforts ahead of the 2022 Chevy Bolt EUV, its sibling SUV. The original Bolt is a crossover-style vehicle that combines hints of an SUV with the best parts of a sporty hatchback. It fills big shoes in the overall lineup as a precursor of sorts to Chevy’s global movement toward hybrid and electric vehicle development.

At an estimated starting price of around $37,000, the Bolt EV is affordable for newbies to the all-electric category. With the Bolt EV, Chevy hopes to attract buyers that otherwise would purchase a gas-powered vehicle by eliminating traditional objections. Obstacles like range and availability of charging stations typically kept even the most open-minded buyers away. The Bolt EV delivers 259 miles of range on a single charge, and with the available DC Fast Charging option, the charging process is fast - roughly 100 miles per 30 minutes.

Chevy also understands that customers don’t want to sacrifice performance for all-electric power. The Bolt EV manages to put out 200 horsepower, plenty of pep for both agile performance around town and travel at high speeds on highways. The Bolt keeps occupants out of harm’s way with tons of Chevy's available safety features. Meanwhile, the available myChevrolet mobile app with energy assist collects data - such as charge levels, calculating the most efficient routes, and available working charging station locations - to keep you firmly in control.

The fun part of The Bolt EV, and the reason America is hooked, is its incredible “fuel” economy. In an apples-to-apples comparison, the Bolt achieves an EPA rating of 108 MPGe city (‘e’ equals ‘equivalent’) and 127 MPGe highway. The math is a little complicated but fascinating. According to the EPA, it takes 115,000 BTUs to burn a single gallon of gas, whereas it takes 33.7 kilowatt-hours (kWh) to generate the same amount of energy. More easily translated, if an electric vehicle travels 100 miles on 33.7 kWh, it’s the equivalent of achieving 100 miles per gallon on a gas-powered vehicle. Since that kind of fuel economy doesn’t exist in traditional gas-powered vehicles, it serves to highlight just how special the Bolt EV truly is.

It’s early in the 2022 Chevy Bolt EUV’s lifecycle, and as of the date of this article, the vehicle has yet to be released. What we do know is the Bolt EUV will offer a driving range of at least 250 miles, but likely closer to 300. It’s slated to compete in the crowded compact SUV category, but our sneak peek at its silhouette tells us looks won’t be an issue. It’s a sleek, modern design with sporty, clean angles that hint at an aggressive curb appeal. Our guess? Its looks will be reminiscent of European luxury SUVs.

The Bolt EUV is the first Chevrolet model that customers can equip with GM’s Super Cruise hands-free cruise control. Already available on select Cadillac vehicles, Super Cruise works on compatible highways like an adaptive cruise control on steroids. It controls acceleration and braking by detecting vehicles ahead and dynamically adapting speed to traffic conditions. Drivers can take their hands off the wheel, and the system will keep it traveling in its intended lane of traffic.

We expect the Bolt EUV (which stands for Electric Utility Vehicle) will offer approximately six-inches of additional length than the Bolt EV hatchback. That greater size and SUV body style will come at an equally greater price. Chevrolet hasn’t officially released pricing, but the Bolt EUV’s starting MSRP is rumored to be around $3,000 more than the Bolt EV.

We Can't Wait for the Chevy to Go All-Electric

Welcome to Frank Kent Chevrolet, the Dallas-area’s favorite Chevy dealer. We are committed to providing our customers with the highest level of service from the moment they step through the door. We are committed to a hassle-free, haggle-free buying experience and have assembled a team of highly-trained sales consultants to walk you through the process from start-to-finish. Our sales team understands hybrid and all-electric powertrain technology, so we’re ready to answer all your questions and walk you through the process of buying, charging, and operating an alternatively-fueled vehicle. We’ll take the confusion out of your decision and give you all the information you need to determine whether EV technology works for you.

Regardless of what you decide - new, used, Certified Pre-Owned, EV, gas-powered - we’re here to help. Sales and financing go hand-in-hand, so once you’ve chosen your next new vehicle, it’s time to find the most competitive finance or lease program for your particular needs. Because of our high sales volume, Frank Kent Chevrolet has access to great financing plans, and we can work with your specific credit score and budget to lock in the best deal. We will fairly value your trade-in and help you stay on budget.

After the sale, we’ll help you service and maintain your vehicle according to manufacturer guidelines, so it’s always in optimal condition. Our state-of-the-art service facility is staffed with factory-trained and certified technicians with the skill and experience to perform everything from routine maintenance (like oil changes and tire rotations) to more extensive vehicle repairs. Conveniently schedule your service appointment online or give us a call. We invite you to visit us at 401 S I-45 in Ennis, just south of Dallas. Our team is ready to help you find your next new vehicle.